For this week's blog, I wanted to learn and read papers about a common claim made by the pro-GMO scientists: that creating a crop by transgenesis is better than traditional methods for creating plants. I'll explain a bit more, but we'll have to start with the very basics: as this paper outlines, there are three broad categories of plant breeding, and for the sake of simplicity, we'll be focusing on only two of these:
So, the pro-GMO parties state that creating a new strain of a plant through transgenesis can be better than mutagenesis, where you get random mutations, or even cross-breeding, where two genomes with thousands of genes integrate (although I wonder where Napoleon Dynamite would be if he didn't have a hybrid Liger). A few recent news articles have reported that plant breeders are turning more frequently to radiation and mutating chemicals to create new strains because there are fewer regulations, so this topic is all the more relevant.

Before you read on, I feel the need to clarify a few things. I've been working on this blog article for over one week, because the spouse is stuck on one fact: "How can nuking a plant be OK, but a GMO isn't? Do you mean to tell me that if a pomegranate with grape-size seeds appears in Fukushima, that's OK?" Spouse: you'll be reading this again in a few hours when I ask you to review. Don't get stuck on that. Read on. The whole point of this is to find out whether it is OK or not. (Addendum: it's important to note that plants derived through mutagenesis are not excluded from the "Certified-Organic" label. Transgenic crops, however, are excluded).

So this week, it's the battle of the methods thunderdome-style: traditional breeding vs transgenesis. Two methods enter, one method leaves... Or maybe neither one leaves. Or maybe both leave a little
bloody. We'll see. (BTW, I'm pretty proud of my little image here.)

Round 1: Mutagenesis vs Transgenesis 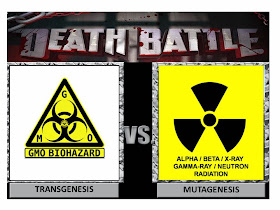 To get started, I reached out to the folks at Biofortified.org. I had tried finding a review on the topic, but I couldn't find a good comprehensive paper that summarized the different methods. Someone should get on that :) Anyway, they sent me a paper from the Proceedings of the National Academy of Sciences (PNAS), which served as a great starting point, because then I could start cross referencing.

This paper, released in 2008, looked at the expression of thousands of genes to find out if there were any unintentional changes in gene expression in transgenic crops (I can hear the spouse now saying "huh?"). Gene expression refers to how much of a gene is turned on or turned off, and is measured by amounts of RNA. If you remember high school biology, DNA is transcribed into RNA which is then translated into protein, and the protein is generally considered to be the final goal. Now, proteins generally do not work independently and often regulate one another. For example, if protein A and protein B work together in the cell and you change the amount of protein A, you might also affect protein B. That consequence is often easier to identify, particularly if you know that protein A and B work together. But sometimes, you see a change in protein C and then you scratch your head and try to think of how protein C could possibly be affected by protein A. So, in this study, they wanted to determine if there were any unintended changes in gene expression when you add a gene in a transgenic plant (i.e. GMO), and compare it to the unintended changes in gene expression when you create a plant by the more "traditional" mutagenesis route, such as by gamma-irradiation. Yes... Gamma-radiation is real and is not confined to creating the Hulk or other super-heroes (BTW, don't scientists in comic books seem incredibly error-prone?)

The study seemed pretty straightforward and included the appropriate controls (although the plants were grown in the lab). The authors compared transgenic rice strains (i.e. GMOs) and strains of rice generated through mutagenesis, to the closest non-modified strain (i.e control). The authors found that in all the strains, there were unintended changes in the expression of genes that are related to plant stress or defense, and the paper spends a lot of time breaking down these genes into various categories. There are also changes in gene expression in certain genes that might be related to the transgene or mutant gene itself (i.e. changes in protein B in my previous explanation). The authors draw several conclusions:
Round 1 Results: advantage to transgenics


Round 2: Hybrids vs Transgenics

So, at first I was a bit disappointed. I couldn't find a paper that had done a battle between hybrids created by cross-pollination/cross-breeding and GMOs. But then when I thought about it, a head-to-head battle didn't really make sense. What would you use as a control? What would be the GMO equivalent of a broccoflower? As a consolation, there were plenty of papers that had examined genetically modified strains of corn vs their non-GM control strains.

The most comprehensive paper I found was a 2010 paper that had looked at changes in gene expression, as well as proteins and metabolites, in Round-Up Ready corn and Bt corn, compared to the closest unmodified control. They used seeds from the same location over several years, as well as different locations in the same year, to make sure that they had accounted for geographical and year-of-harvest effects. Their conclusions are:
There are many other papers that have done assessments on changes in gene expression in plants, and this freely available 2011 review does a really nice job categorizing the studies based on crop. If you quickly scan through it, you will see that it's a topic that has been studied quite a lot. So why is any of this important? Well, "substantial equivalence" is the starting point for food safety assessment. That means that you have to show that the food item is equivalent to conventional food in several different categories including nutrients, toxins, allergens, etc. So examining changes in gene expression is a different way (and I'd argue that it's a more rigorous way) of determining "substantial equivalence". There are a few conclusions from the review that are worth highlighting:
I agree.  I fail to see how mutagenic technologies are any safer than transgenesis. I agree with the fact that food safety should be regulated and determined based on the trait and not based on the method used to generate that trait.

So, unfortunately, there was no clear victor in today's thunderdome because there haven't been enough head-to-head battles. What is clear is that stringent regulations against all forms of transgenics don't make sense considering their history of safety and substantial equivalence.